Re-vegging takes place when cannabis plants in the flowering stage revert back to the vegetative stage. Cannabis plants that are re-vegging often grow strange mutated leaves or smooth single finger leaves with no serrations.

Some growers benefit by taking clones from flowering plants or by harvesting them twice but otherwise, re-vegging should be prevented.

Cannabis is an annual plant enduring unique stages in its life cycle; germination, vegetation, and flowering. Upon being harvested, the plant and its genetics give no further benefits unless cuttings from it are taken during the vegetative phase.

If a grower wants to recover genetics during the flowering period they may intentionally re-veg the plant but what if accidental re-vegging takes place?

In this guide, you will learn about cannabis re-vegging and the perks and downsides of it

Most cannabis plants, with the exception of autoflowering seeds, are photoperiod strains requiring long nights to trigger the flowering phase and produce buds.

During the flowering phase, indoor plants normally receive twelve hours of uninterrupted darkness. If they receive light during their twelve hours of darkness they will respond by re-entering the vegetative phase and begin to grow mutated leaves that are often one finger fan leaves. This situation can occur from light sources as weak as the LED from a fan.

So to sum up, re-vegging occurs when plants receive light during their 12-hour dark cycles, a few interrupted nights or a small leak of light and it can take place.

Cannabis plants may accidentally re-veg due to one of these common issues:

Cannabis plants revisiting the vegetative stage show symptoms that include: 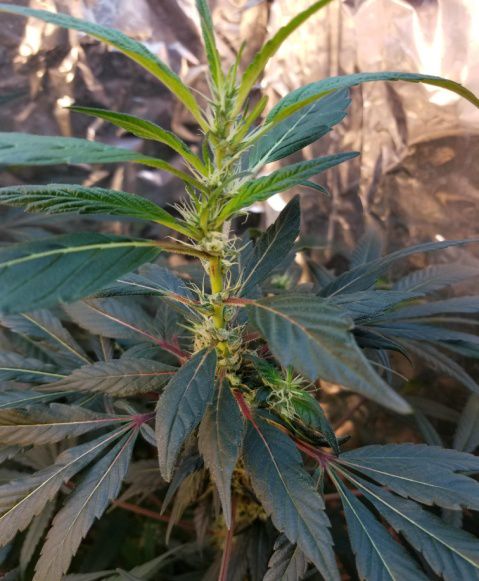 This plant was first grown outdoors during Spring and began flowering due to shorter nights. As the season matured, nights grew shorter giving more daylight for the plant.

Due to shorter nights, it re-entered the vegetative stage and grew oddly-smooth leaves from its center stem, as shown above. Single finger leaves began growing from developed buds during the flowering stage which is the main sign a plant is re-vegging.

The keeper of this plant was unaware that briefly turning lights on during dark periods would cause an issue. As such, growers should know plants can re-veg even if given only a few nights of momentary light. Growers should never disturb the plant when it is sleeping! 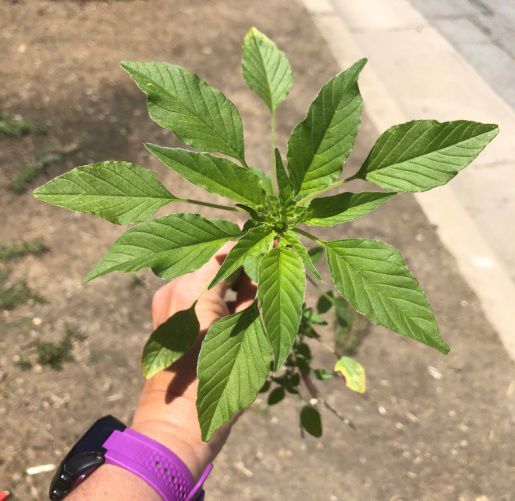 Take a look at the image above. You will notice leaf edges are smoother than traditional leaves. That is the primary sign of plant re-vegetation. 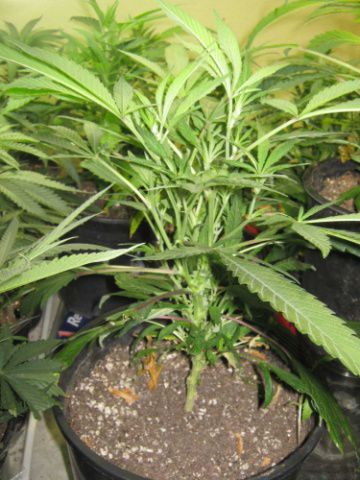 Directly above is an indoor-grown plant that during the flowering phase and Spring season went outdoors. Once outside in shorter-night dark cycles it immediately re-entered the vegetative stage. 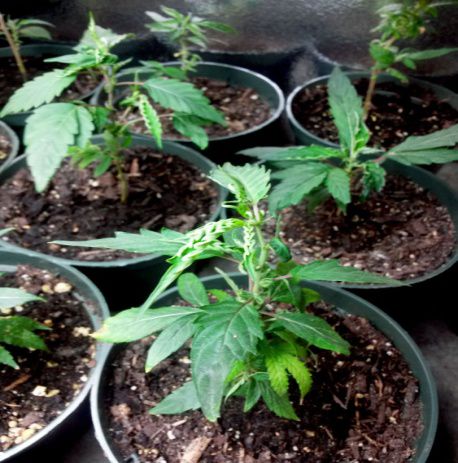 The clones above were taken from a flowering plant and began re-vegging, which as shown, caused odd growth and smooth-edged leaves. As is the case with most plants re-entering this cycle, several single-pointed leaves grew too, which again, is a key indicator that a plant is re-entering the re-vegging phase.

Plants receiving light at nighttime quickly re-veg as their cycle is thrown off which prompts them to begin the process over again. As said above, all growers should keep this in mind while gardening. 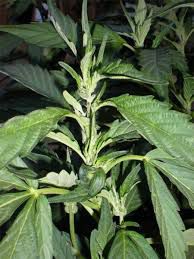 Once the light schedule changed, bud growth ceased and single-pointed leaves began to grow. While a few white hairs are still present, it has nearly fully returned to the vegetative stage.

Leaves may appear differently based on strain and environment. However, growers know when a plant is re-vegging when its leaves appear smoother than normal (No sharp edges to the leave).

There is really no other causing factor that would prompt a plant to grow smooth-edged leaves. Of course, growers should keep watchful eyes on their plants, and as such, should know if any light sources are present at nighttime. Even an oscillating fan or led on a multi-plug socket can be enough to interrupt the plant's night cycle.

If plants begin exhibiting smooth or singular finger leaves, the grower can be confident that re-vegging is taking place. Light cycles are a crucial re-vegging preventative and should, at all times, be thoughtfully considered throughout harvest lifecycles.

Cannabis plants express re-vegging signs uniquely to the strain so all signs should be closely watched by harvesters. 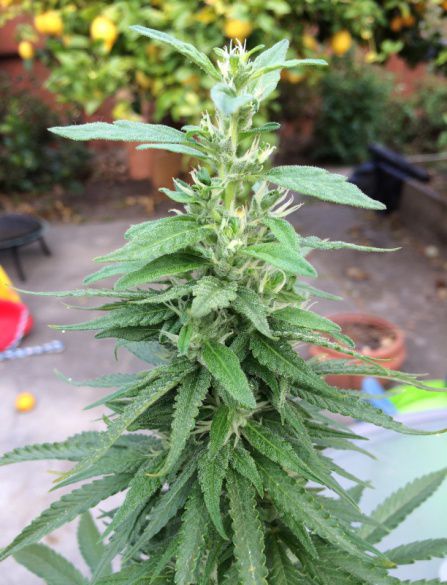 In some cases, cannabis growers purposefully re-veg their plants.

Monstercropping, which is the process of taking a clone from a plant in the flowering phase in order to change its initial growth patterns, is an example of re-vegetation done intently.

To elaborate, Monstercropping encourages growers to re-veg their plants and involves taking clones from a flowering plant and re-vegging them under a 20/4 or 18/6 lighting schedule.

The idea is re-vegged clones produce stalkier plants. This is not normally recommended as it seems to be the recipe for getting hermaphrodites or other issues related to stressing the plant.

Another technique involving this is when a grower purposefully puts the plant back into the vegetative stage in order to grow the same genetics; this is often done by warm-climate, outdoor growers wanting to cultivate a second annual harvest.

Normally though, when growers see the leaves of a plant that is re-vegging, it is an unwelcome sight.

How to fix the problem

Like always, time is the greatest healer! The grower should firstly fix any light leaks in the grow area. The timer should also be checked to make sure it is not faulty. After this, the plant will need some time to go back into flower.

The leaves will not correct themselves once they have formed and the trimming during harvest is going to be a bit of a nightmare. However, the plant can still produce some quality buds regardless - depending on the genetics that is.

Some strains are much more sensitive to stress so they can hermaphrodite much easier than others. A very unnatural interruption like this can be enough to stress the plant into producing male pollen. Once this happens the plant will pollinate its self and focus on making feminized seeds rather than buds. So the grower should watch carefully for this as it could be time to dispose of the plant and start again if seeds are of no use. The buds will still be smokeable, but if this situation occurs early on in flower then there will be very little bud on offer.

Four Steps to Stop a Cannabis Plant from Re-Vegging

So to sum up, here are four steps to be taken to stop a plant from re-vegging.

What Should a Grower Do About Accidental Re-Vegetation?

There are essentially two options when a plant re-vegs, a grower can:

Fortunately, with time, patience, and care, cannabis plants can begin to grow normally once again. If a plant begins to re-veg there is no need to panic as growers have pursuable options to revert its cycle.

With some time and adjustments, plants can grow normally again to produce luscious buds beloved by both cultivators and connoisseurs alike.

This is just one of many different cannabis plant problems, follow our blog to learn all about the different problems growers face.