No many people like to think about what a nuclear fallout or natural catastrophic event would bring about. However, for some people it is their full time job. The Svalbard Global Seed Vault has been dubbed both 'The Doomsday Vault' and 'Noah's Ark'. It is a man-made tunnel located in the frozen Norwegian island of Spitsbergen, around 812 miles (1,306.79 km) away from the North Pole.

The purpose of the vault is to eventually store over 1.5 million distinct varieties of agricultural crops from around the globe, preserving them in case they are ever lost.

How long has the Svalbard Global Seed Vault been storing seeds?

The first batch of seeds were deposited into the vaults in 2008 and now 12 years on in 2020 the work still continues. As of today there are over 1 million seed samples stored. Each sample consists of around 500 seeds which gives a total of 500 Million individual seeds currently in storage! The vault has a maximum capacity of 4.5 million samples which equivalates to 2.25 billion seeds!

How secure is the Svalbard Global Seed Vault?

The vault was designed to withstand any type of catastrophic event. The tunnel was dug 120 meters into a sandstone mountain and features 1 meter thick walls constructed from steel reinforced concrete. The tunnel features not just one, but two blast-proof doors. The estimated construction cost for building this seed bank is $5 Million and was funded by the Norwegian government. But the costs do not stop there. Every year the "Food and Agricultural Organization's Global Crop Diversity Trust" forks out $125,000 to keep it running!

One of the top threats against mankind is global warming, with this in mind the seed vault was located way above sea level. If all the polar ice was to melt, the tunnel would sit around 80 meters above the estimated sea levels.

Yes, the Global Seed Vault is storing the high grade!

Three organizations have deposited over 20,000 cannabis seeds through 39 separate deposits into the vault. So you can rest assured that a post apocalyptic world will potentially have plenty of high grade marijuana. All of a sudden the future doesn't sound quite so bad, right? The three companies to thank are 'Nordic Genetic Resource Center', 'Leibniz Institute of Plant Genetics' and 'Austrian Agency for Health and Food Safety'.

There are actually more weed seeds in the global vault than blueberries, raspberries and asparagus. Another interesting fact is that over 500 of these cannabis seeds are from North Korea!

These 20,000 marijuana seeds come from at least 17 different countries, but we are unable to identify what exact strains are being stored. But we do know that both high THC and high CBD varieties are tucked away safely in the vault.

Why is the Svalbard Global Seed Vault needed?

As mentioned before, whether it be global warming or a nuclear fallout we need to be well-prepared. There are other smaller seed banks around the world, but they do not come close to the security of Svalbard's Global Seed Vault.

A good example of this is the "Philippines agri crop gene bank". This gene bank held some of the worlds most important crop genes but was nearly completely destroyed by a typhoon in September 2006 when an enormous amount of mud and water found its way into the gene bank. Many of the seeds had been kept frozen in order to preserve them long-term. The water and mud that got into the building cut off the electricity to the freezers and due to all the heat and humidity thousands of the seeds had germinated; rendering them ruined from a preservation point of view. Overall 70% of the genetics being held was lost.

The Svalbard Global Seed Vault has already proved its use. During Syria's civil war in 2015, a unique type of grain was lost in the destruction of Aleppo. However, this grain had already been deposited into the vault so researchers were able to obtain duplicates.

With global warming effecting us we will see massive changes to the amount of rain that falls, along with major temperature differences. Our current agricultural crops are likely to struggle to cope in these new environments. Having all of these genetics saved in pristine condition allows botanists to create crop varieties through cross-breeding that will be able to withstand the future conditions that we face.

What method is used for storing the seed samples?

The average temperature inside the seed vaults are -18 Celsius. The seed samples are sealed in foil packets and are then placed into a sealed box before sitting on a designated shelf. This method keeps the seeds viable for decades, centuries and in some cases thousands of years. If the electric supply ever ran into any issues the permafrost and naturally cold temperatures of Svalbard will help keep the seeds viable. Learn more about how to store seeds here.

How does one company obtain and sort millions of genetics?

Various seed banks around the world have sent over seeds to the Global Seed Vault. Depositors retain their ownership over the genetics that they send and no one else is given access to their seeds.

On the 25th February 2020 UK's Prince Charles sent over the seeds of 27 wild plants from his estate. These included species that are slowly disappearing from the UK landscape. 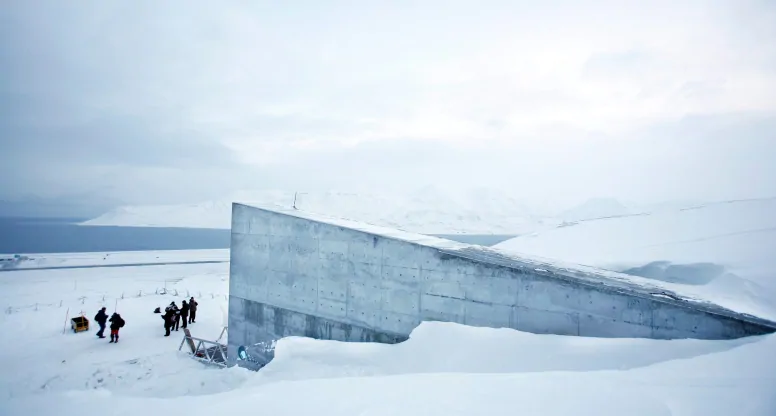 The history of the Blueberry cannabis strain July 25, 2021

The Difference Between Photoperiod and Ruderalis Cannabis June 13, 2021